5 “Common” Police Mistakes That Get Your DUI Dismissed in 2022 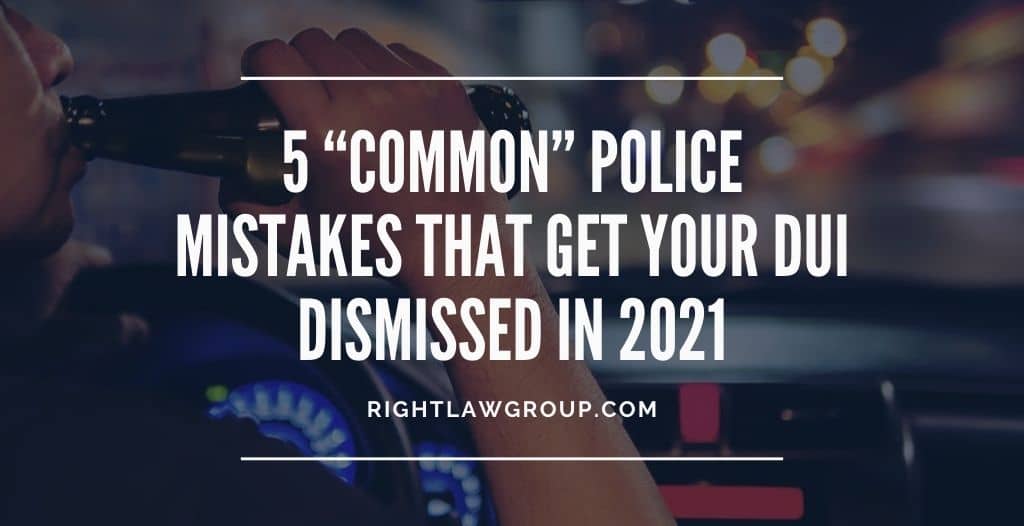 If you have been arrested for DUI, the first thing that people want to know is how can I get my DUI dismissed.

Facing a DUI charge in Colorado can be scary and overwhelming. However, it is important to remember that your DUI arrest does not have to lead to a conviction – especially if law enforcement officials made any errors when handling your arrest. With the guidance of a trusted DUI lawyer, you can increase the chances of a successful outcome and even get your DUI dismissed. Below are five common police mistakes that can get your DUI dismissed in 2021.

Police officers periodically fail to follow the required rules at DUI sobriety checkpoints. For example, checkpoints are required to be publicized in advance and located in a safe area. Drivers also must receive adequate warnings that they are approaching a checkpoint. In Colorado, if police violate multiple guidelines, the checkpoint could be deemed unconstitutional. Here are a few common mistakes that may combine to get your DUI dismissed:

2) Failure to demonstrate probable cause to arrest you

Colorado police sometimes lack probable cause when they stop drivers and arrest them. This practice directly violates Colorado laws that require law enforcement officials to have reasonable evidence of a DUI before pulling you over and arresting you. If a police officer fails to provide sufficient evidence that you were breaking the law, the evidence gathered after your arrest can be deemed inadmissible in court.

Field Breathalyzers produce an error rate that ranges from .005 to .02%. Police can also make mistakes administering them. Colorado police officers administer field breathalyzers that measure the amount of alcohol in your breath. That figure is then multiplied by a “partition ratio” to yield an estimate of your actual Blood Alcohol Content (BAC).

Given this information, it is important to always comply with police and take the breathalyzer following a DUI arrest. In addition to demonstrating compliance with law enforcement officials, your Breathalyzer results could yield results that are inconsistent with your true Blood Alcohol Content (BAC). This could result in your Breathalyzer results being removed from consideration, thereby enabling your case to be dismissed.

“Proving that you were driving a vehicle is not always a straightforward process”, says Denver DUI lawyer Matt Chaput, especially if you were involved in an accident and there were no witnesses who saw you actually driving the vehicle. Additionally, many people do not realize that you can be charged with DUI in Colorado even if you are not operating the vehicle. If you have “actual physical control” of the vehicle with alcohol in your system, you can be charged. So, don’t think that you can sit in your car to sober up. Your best bet is getting an Uber or calling a friend.

5) Test Inaccuracies Due to Ketosis

Ketosis stemming from diabetes or the popular “Keto Diet” can lead to inaccurate breathalyzer results. Ketosis is a metabolic process that involves the body’s burning of stored fat for energy. This process can cause ketones, which are similar in composition to isopropyl alcohol, to build up in your body. During a breathalyzer test, these ketones are emitted through your breath, producing a false positive.

Because the Keto Diet is all the rage among many Colorado residents, the DUI-related implications are considerable. People affected by diabetes and low blood sugar may also be impacted by these inaccuracies. If you have diabetes or are following a Keto or Paleo diet, be sure to inform your DUI lawyer right away so they can explore any potential breathalyzer inaccuracies.

What is the key to helping you get your DUI dismissed in 2020?

As outlined above, Colorado police make errors that can result in your DUI being dismissed. Even if these errors are inadvertent, they may enable key pieces of evidence to be suppressed or removed from consideration in your case.

The single best step you can take to help you get your DUI dismissed is to contact an experienced DUI lawyer in Colorado. A Colorado Springs DUI lawyer with a proven track record of success will evaluate the police procedures taken during your arrest and carefully screen for the presence of any police mistakes.

If your attorney discovers any mistakes, they will file a motion to suppress related pieces of evidence. If successful, your lawyer could then move to have your charges dismissed, enabling you to win your case without suffering through an expensive trial. Most importantly, an experienced lawyer can help prevent a DUI conviction from appearing on your driving record.

If you have been arrested for DUI and would like to learn more about what you can expect and how you should defend yourself, please contact Right Law Group today for a free consultation.

What happens if your DUI case is dismissed?

If you are arrested for DUI, but then your case is dismissed, this means the charged against you have been dropped. This means that your RAP sheet will still show an arrest, but it will also be clear that the case has been dismissed.

Can a DUI charge be dismissed?

There are several reasons why a DUI charge might get dismissed. Some of these reasons include improper cause to stop you, an illegal police search, an illegal field sobriety test, an illegal chemical test, and many others. In any DUI situation, if the police fail to follow all protocol, there will be a chance of getting the case dismissed.

Will a dismissed DUI show on a background check?

Is it worth fighting a DUI?

In almost every situation, yes. There are numerous, very specific protocol police must follow during an arrest in order for the charges to hold. It is always worth it to have a DUI lawyer review your case and determine if there are grounds to get the case dismissed.

Can a first time DUI be dismissed?

Getting a DUI dismissed is not impacted by previous DUI arrests or convictions. For a first offense, there is still a possibility of getting the DUI dismissed depending on the situation.